Git is the most popular and widely used modern source control system. It is a mature, actively maintained open source project originally developed by Linus Torvalds in 2005 for the Linux kernel development. Git allows to track and provide control over changes in the source code, configuration files or documentation over time.

Github is not Git, there are two separate things, to avoid any confusion, let’s keep it about Git.
By only focusing on Git, you will be able to assimilate Git concepts much faster and then be able to use them with Github.

It’s time to start your HelloWorld project by creating a folder to store all the source files.
For now it’s a regular folder, let’s turn it into a git repository by simply run the git init command.

Create a README.md and a sh file

You can check the working tree status of our repository by running the git status command.

Two files were created but your repository is still empty.
The reason is because you need to explicitly tell git to take a snapshot of your changes.

Each snapshot (or version) is called a commmit and is uniquely identify by a hash.
To take a snapshot, you need to first staging the files you created or modified and then committing them. When files are created they are untracked by git, that means it has no idea about them. Staging a file, tell git to take the changes in that file into consideration when you take a snapshot of your repository.

To stage a file, simply run the git add command

Excellent, now you can see that the README file is staging and ready to be committed to the repository. Git will includes all changes (adding, removing, modifying) in staged file when you will take a snapshot.

You need to create a commit now, using the git commit command with -m option to provide a descriptive commit message.

Add another commit for the script file

Note: It’s possible to add multiple files in one commit

So now, you have two commits in your repository. Each commit has its own unique identifier and stored with a pointer to its parent commit.

Git allows you to branch out from the default main branch (by default called master).

What’s the point of branching ?

Assume you want to add a new feature on your HelloWorld project without risking the stability of you existing codebase. The idea it’s to create a feature branch and develop/refactor without any risk.
Branch are really useful especially when your are working collaboratively, on breaking change, on features, etc…

The command only create the branch, but you are still on the master branch. To switch branch to another, use the git checkout command

Note: When it’s a new branch you can create and switch to it with one command git checkout -b feature

Switch back to master and take a look on the README file, you can see the modification is not reflected.
That shows both branch can be worked separately with any risk and reflect on each other.

Now, modify the sh file and create a new commit on the master branch. Your git graph now looks like that. 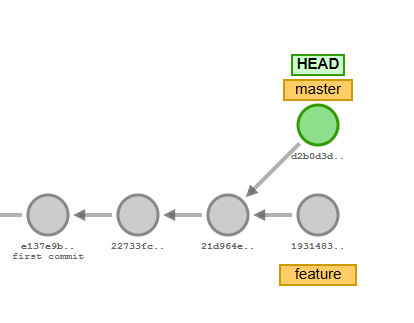 Ok, so now you have developed your feature, and you want bring back all in the master branch to deliver it. There is no point to branch out without being able to merge it back together. Let’s see how it work. Git offers several ways to merge branch but the simplest one is git merge command.
To merge the feature branch into the master branch, make sure you are on the master and run the following 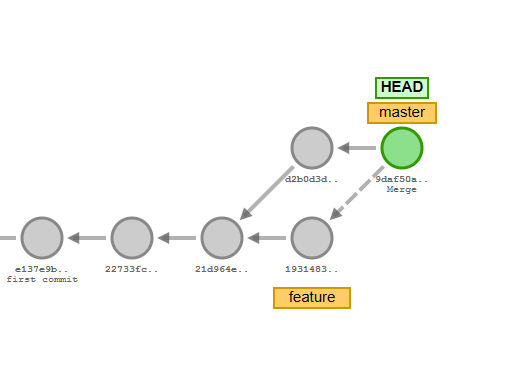 If you look to the README file, you can see that the modification done on the feature branch are now on the master branch as well.

To simulate command and see what the graph looks like, you can use visualizing-git

Be aware that conflicts on merge can happen, it essentially means that the two branches have modified the same part(s) of the same file(s).
When this happens, git will prompt you to resolve the conflicts first before resuming the merge.
Merge conflicts are a very careful process to ensure to take the wanted change, otherwise, bad things could happen.

You works on local repository but git allows you to have copies of your codebase on remote repositories. Create a Github repository and configure your remote to point on it.

With remote you can share codebase with colleagues and works collaboratively on the project. But also from a disaster recovery perspective, if you completly loose your local repository there is still a copy of it.